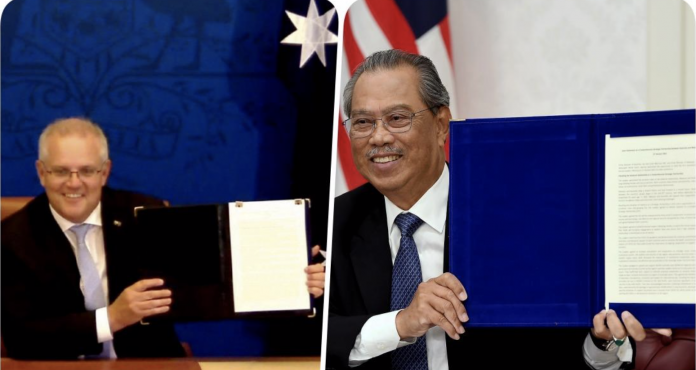 27th January 2021 marked another historic moment for Malaysia and Australia as this day witnessed both countries commitment in elevating their longstanding and close ties into a much stronger bilateral relationship through the launching of Malaysia-Australia Comprehensive Strategic Partnership (CSP).

Through CSP, collaborations in new fields such as digital economy, health emergencies, youth empowerment and more would be further explore while in the same time it would also consolidate and enhance the existing cooperation between Malaysia-Australia deeper.

Malaysia-Australia relationship is underpinned by a long historic institutional and strong people-to-people links compared to any other Asian neighbour. Malaysia also has a strong defence and security cooperation with Australia.

Dating back to the Second World War, the Malayan Emergency and the Confrontation that had further developed through the Five Power Defence Arrangements (FPDA) and Malaysia-Australia Joint Defence Programme (MAJDP) agreements, the cooperation continues to this day.

For years, the Australian Defence Force (ADF) presence at Royal Malaysia Air Force (RMAF) Butterworth Airbase in Penang contributes to its capability to conduct maritime surveillance activities in the region, in particular through RAAF AP-3C and P8A-Poseidon surveillance flights under the bilateral Malaysian and Australian Operation Gateway patrols.

The AP-3C Orion from Australia was also involved in the search of MH370 and the 2015 Operation Gateway when 8 Indonesian pirates hijacked MT Orkim Harmony and RAAF helped Malaysia to find the ship off Southwest of Vietnam.

Now, the crucial question is how would the CSP benefit Malaysia mainly in the foreign policy, defence and development context?

Firstly, Malaysia and Australia share a common goal of a safe and secure world.

In order to promote both nations shared values, tackling the shared threats, and maintaining a strong and prosperous Asia-Pacific region requires a deep and special partnership, including on foreign, defence and security, and development engagement that with hope could be further demonstrated through the CSP.

Secondly, the CSP would also aid in enhancing the Operation Gateway by offering wider capabilities for both countries.

Granting access to the RAAF inRMAF Butterworth has proven its strategic value to Malaysia on many occasions.

Therefore, Malaysia could also explore other opportunities by granting access to RAAF to launch their assets from Labuan Airbase.

As CSP would enhance Malaysia and Australia participation through various platforms and dialogues, this idea could perhaps be further discussed by also inviting another Malaysia’s strategic partners such as the Japan Maritime Self Defence Forces (JMSDF) as part of the trilateral arrangement for a Maritime Domain Awareness (MDA) from Labuan Air Base.

This would also encourage Japan to be actively involved in the regional security architecture since they have amended Article 9 of their constitution to recognize the Japan Self-Defence Forces (JSDF) larger role to support the international security.

Thirdly, in recent years the FPDA has begun to develop its ability to address non-conventional threats, initially focusing on maritime incidents.

As there has been growing tension in the South China Sea (SCS), the CSP would help to increase security in the region by enhancing Australia’s role in the ASEAN Defence Ministers Meeting (ADMM) Plus – Expert Working Group (EWG) on Maritime Security that would promote adherence and compliance to The United Nations Convention on the Law of the Sea (UNCLOS, 1982) among the claimant’s countries in exercising their rights in making claims regarding SCS.

The strong shared history and bonds form the bedrock of Malaysia and Australia defence relationship today and with the CSP, it is hoped that it will continue to further strengthen the partnership between both countries.

MN remains, unless PAS declares calling it off